That's one spring and many lakes 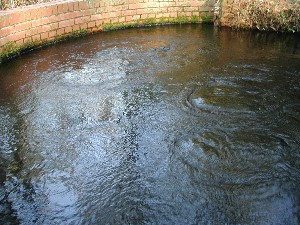 Boiling Spring Lakes derives its name from the boiling spring that flows with an incredibly pure stream of water. The city's centerpiece, the 275-acre "Big Lake", is just one of more than 50 natural and man-made lakes in the city. The "Big Lake" is fed by five springs and Allen's Creek, and is 2-1/2 miles long with 10 miles of shoreline.

In 1961, the developers of Boiling Spring Lakes happened upon a gushing spring concealed in a wooded ravine. Wishing to beautify the area, a 4-foot high brick wall was built to encompass this natural phenomenon. Almost before the masons had completed their work, the spring suddenly stopped running. Within a few hours, it burst out in a free full flow some 15 feet outside the wall.

When the 3-foot wall enclosing the spring was built, the weight of the water in the enclosed area resulted in a back pressure against the spring as it moved to an easier release point (downstream). Over time the wall broke allowing the impounded water to flow (escape). With a lower water level in this area (less back pressure), the spring returned to its former location, and it boils today.

Many years ago, the spring was known as Bouncing Log Spring, in as much as a large chunk of petrified wood was tossed and churned in the water gushing up from the ground. Eventually, there was no longer a log being bounced around by the upward thrust of groundwater, and the name was changed to Boiling Spring. State geologists have calculated that the spring discharges approximately 43 million gallons of water each day.